People from outside the area often share with me their quandary regarding purchasing a home in the Palm Springs Real Estate area or in the Phoenix market. At one time I had similar considerations as well. I’ll share with you what swayed my husband Bill and I towards the Palm Spring area.

Both areas have abundant palm trees, golf courses, mild winters, beautiful desert mountains and many great communities to choose from. Phoenix has things Palm Springs doesn’t have and, of course, Palm Springs has amenities and activities which Phoenix does not offer. Before we invested in property here we did what most people do, we vacationed both here and in Phoenix.

If you are new to either area you’ll want to get out of the resort or rental home that you are enjoying and take a drive around. You’ll want to explore each area’s attractions, shopping, amenities, and, of course, you’ll want to consider traffic congestion and air quality, as well.

Hitting the Phoenix freewayThe Phoenix area has always felt larger and more congested to us, which it should.

In contrast, the Coachella Valley (which is often referred to as simply ‘Palm Springs’ although it includes the cities of Palm Desert, La Quinta, Indian Wells, Rancho Mirage and several other cities) had:

After numerous trips to both the Phoenix and Palm Springs, we both agreed that the Palm Springs area seemed more relaxed. Most people find the atmosphere of the Coachella Valley more ‘small town-like’ than Phoenix. Also, a multitude of cultural experiences outside of the Coachella Valley can be found within a relatively short drive in the Los Angeles, Las Vegas, San Diego, and even Phoenix greater metropolitan areas.

If you love the ocean, you’ll want to note that Palm Springs is only a couple of hours away from numerous glistening beaches, which are a good seven hour drive from Phoenix. For us, our experience in Phoenix and Palm Springs was similar to many of our vacations in Hawaii. We’d start on crowded Oahu and then gravitate to Maui, which then also became crowded, so we wound up enjoying the less crowded Big Island of Hawaii or Kawai.

Consider Air Quality In Both Areas

An even bigger issue for us, however, was smog. The Phoenix area was ranked in 2010 as having the most polluted air year-round in the United States.

“Today, the American Lung Association released its annual report card “State of The Air.”  The news for the 4,281,899 residents of the Valley of the Sun (the Phoenix Metropolitan Statistical Area) is not so good. We are now the city with the most polluted air in the United States. The study measures the average fine particle concentration in the air of each city, a key factor in asthma, bronchitis and other respiratory and heart ailments.” Phoenix Sun® April 10, 2010 – VALLEY OF THE SUN SMOG!

To be fair, the Palm Springs area gets the occasional dust storm which can impair air quality, but usually nothing close to the massive dust storms that the Phoenix area experiences each year.

Both areas offer direct flights from many cities in Canada. Although Phoenix does have more flights in and out of Canada since it is much larger, disadvantages include having to deal with more expensive airport parking, longer security lines, less friendly service, and missing out on relaxing post-security in one of the most beautiful outdoor manicured airport grounds in the United States, Palm Springs International Airport (PSP). Driving in the Coachella Valley is a breeze compared to most areas in the Phoenix metro area; Phoenix has major traffic congestion, particularly during rush hour.

Property taxes in the Palm Springs area are generally valued at 1.25% of the current property value. The exception is small pockets of developments subject to a special Mello-Roos tax.  Recent Phoenix property tax rates ranged from .80% to 1.50% of property value. Here, the tax value is based on your purchased price and can be adjusted annually if the value increases or decreases.

So, Phoenix Versus Palm Springs?

After comparing both areas, it really comes down to personal preference. Small town resort feel or the hustle and bustle of a larger metro area? Skyscrapers or Santa Rosa and San Jacinto Mountain views from the Palm Springs area and beaches two hours away? As you likely figured out by now, my husband Bill and I chose the Palm Springs area..

If you are still interested in a home or luxury condo in the Phoenix area, please contact me. I do know a several great Phoenix area Realtors that I’m happy to refer you to. 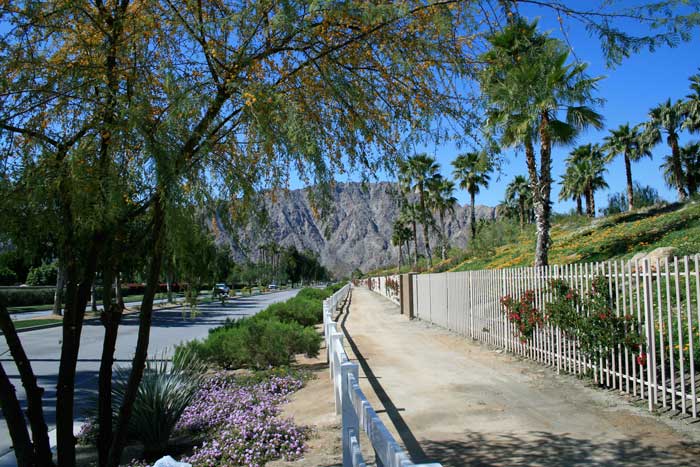